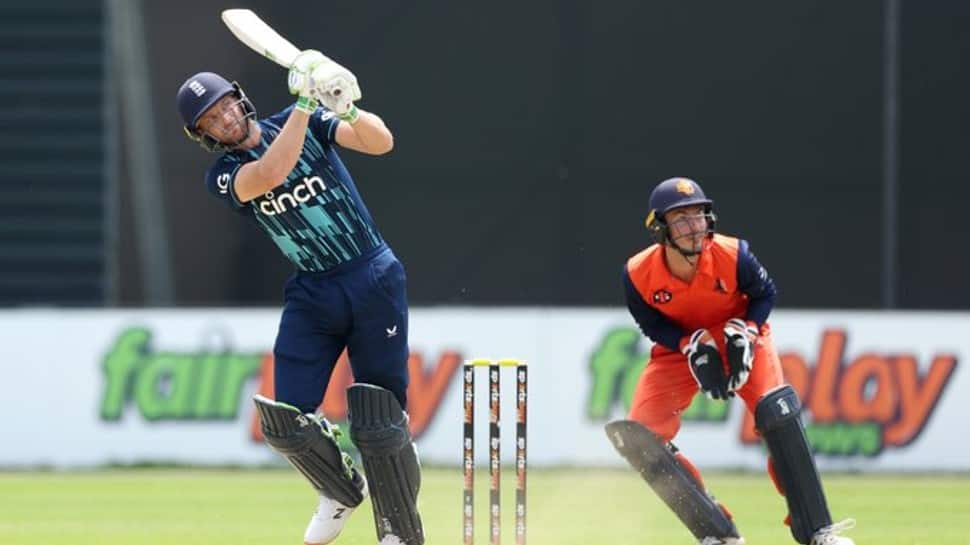 England wrapped up a decisive victory of their notable first visit to the Netherlands at the Amsterdamse Bos in Amstelveen today. David Willey took 4-36 as the Dutch imploded from a promising 203-3 to 244 all-out in the wake of being placed into bat with England pursuing the objective down in 30.1 overs. The centurion Jason Roy fabricated consistently speeding up organizations with Phil Salt and Jos Buttler to assist England with taking the CWC Super League ODI series 3-0 and furthermore dislodge Bangladesh at the highest point of the table

There was a third captaincy mix for the last ODI with the two managers captaining; Jos Buttler taking over from Eoin Morgan whose crotch strain saw him join Seelaar on the invalid rundown. Fortifications had shown up for the Dutch from across the North Sea, with Fred Klaassen and Paul van Meekeren flying in the wake of satisfying their T20 Blast responsibilities, yet it wouldn't forestall one more agreeable England triumph before a fairly decreased yet excited swarm.

Max O'Dowd, Bas de Leede and Scott Edwards generally struck fifties as the hosts set a sound stage at 203-3 by the 39th over, yet the last ten would be one-way traffic; the Dutch profundity again found needing as seven wickets succumbed to only 41 runs. The objective would demonstrate a cakewalk for England, a twofold strike from the returning Paul van Meekeren toward the finish of the powerplay the main interference to a show from the sightseers' batting card.

Buttler won the throw picked, to the failure of generally present, to place the Dutch in to bat. Home openers Vikram Singh and Max O'Dowd would battle to get Willey or debutant David Payne off the square early, and Vikram would track down the main limit off Payne in under persuading style, edged high and wide of second slip in the fourth finished. Willey would again eliminate the teen with a short ball for the main wicket; a top-edged pull taken by Dawid Malan plunging forward from square leg. Tom Cooper ought to have gone the same way to a bouncer from Payne, yet Liam Livingstone needed to haul out of a generally basic catch at midwicket having lost the ball in the sun.

O'Dowd and Cooper started to track down the proportion of the surface in any case, Cooper two times driving Willey through the covers for four and afterward hauling him behind square to take 14 off the ninth over. O'Dowd raised the fifty on the principal ball after the powerplay, flicking Sam Curran through fine leg for four, flagging the beginning of an uncommon section of play where the hosts thoroughly searched in charge. The pair would put on a guaranteed 72-run represent the second wicket to take the Dutch to 88-1 by the eighteenth over. However, Cooper's hostility got the better of him when he hoped to take on a short ball from Carse, one more catchable mis-hit to leg and this time and Livingstone committed no error at profound square.

Bas de Leede joined O'Dowd to take the Dutch beyond three figures as Buttler went to turn; O'Dowd raising his fifty in the 24th hitting Adil Rashid towards cover for one. He would get no further in any case, tumbling to Livingstone in the following over, edging probably behind to go for 50 off 69.

The wickets were sufficient to forestall any huge speed increase; captain Edwards and de Leede draining the ones and twos through to drinks, the hosts pushing up to 180-3 after 36. Subsequent to spending an apprehensive beverages break on 49, Edwards raised his 50 years pushing Rashid out to long on for a solitary. From that point the pair focused on up the beat, and a short ball to Edwards from Carse ought to have had the forward leap; a top-edged snare saw Malan coming in off the rope at in reverse square, however he was unable to hang on.

With 300 least required for an opportunity, the two bats started to take risks, with de Leede pulling Carse hard for four behind square on the main chunk of the 40th. A high full throw two balls later was baseballed over mid-on for four by Edwards to take the Dutch beyond 200, yet another free-hit went asking on the following. Britain's fantastic utilization of the short ball again conquered their conflicting getting to stop a de Leede's respectable innings on the last bundle of the over, Carse surging him on the draw and Rashid hanging on coming round from short midwicket to send de Leede back for 59 off 78.

Teaj Nidamanuru was entrusted with increasing the scoring rate, and Rashid took advantage three overs later, enticing him down the track and turning one past the bat; Buttler properly tidying up behind the stumps. Logan van Beek attempted to get moving and would pop a main edge off Willey to mid off as any expectation of a cutthroat objective fell away. Tim Pringle couldn't find the rope through his eight ball stay at the wrinkle and wound up forfeiting his wicket after a misunderstanding with Edwards in the 47th over. Aryan Dutt had no more karma, again going hard from ball one the youth swung beyond an in-youngster from Willey and lost his posts for a three-ball duck.

Edwards would turn into Payne's lady ODI wicket in the penultimate over, foxed by a more slow ball and chipping to Roy at mid-on for 64, getting done with a respectable series normal of 107. It wouldn't be sufficient to get his side even to 250 in any case; last man Paul van Meekeren losing his off stump to Willey on the second bundle of the last finished. Willey wrapped up with figures of 4-36 as the Dutch's absence of batting profundity told against them again on a generally faultless pitch; the last ten overs having yielded seven wickets and not a solitary limit as the hosts drooped from 203-3 to 244 hard and fast.

The Netherlands would require a minor marvel to protect the aggregate, yet they weren't even conceded a little karma. Both Fred Klaassen and Logan van Beek would remove top edges hoping to emulate England's short-ball technique early, however none would go to hand and one would go to the rope behind the manager. Salt and Roy would take England to 85 without misfortune before the Dutch had any happiness; van Meekeren striking two times in two balls in the last over of the powerplay. Salt would miss the mark concerning fifty edging onto his stumps as a length ball nipped back at him, while Malan went for a duck two balls later, progressing on van Meekeren yet excessively far across, wrapping up bowled around his legs and creating to lose his off stump.

Ordinary help would quickly continue as Roy and Buttler energetically took the vacationers past three figures, Roy raising his 50 years off 47 balls, pushing van Beek through the covers for one in the eighteenth, and Buttler would put his foot down in the following, hitting teenaged spinner Dutt for a six over midwicket and afterward four over additional cover on sequential conveyances as England traveled beyond 150. Buttler would raise his own fifty in the 25th, pulling van Meekeren hard and absolutely to de Leede on the square rope for one. Whenever an opportunity at last came in the following over, it was scorned as Roy goaded a shaper back at Klaassen, who was delayed to respond and shelled it with hard hands. The century organization came up three balls later as Roy drove a full ball hard over mid off for four, by which time the battle seemed to be out of the Dutch.