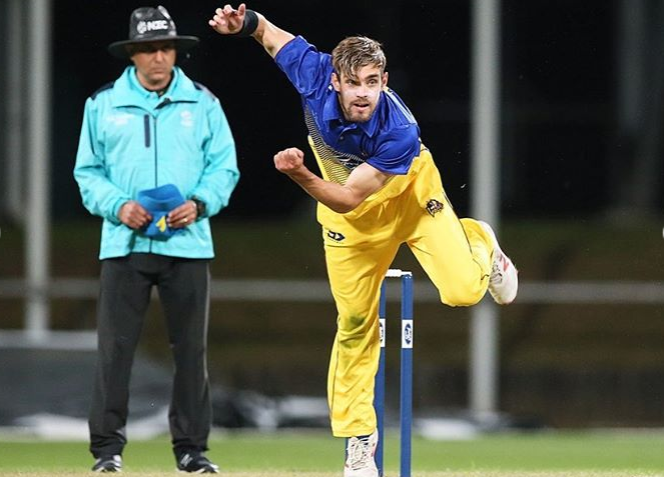 Rippon named in NZ squad for Ireland, Scotland and Netherlands

Michael Rippon, the previous Netherlands legspinning all-rounder, has been named in the 15-player crew for New Zealand's impending white-ball visits, New Zealand Cricket reported on Tuesday (June 21). Rippon will be joined by uncapped wicketkeeper Dane Cleaver - who has been picked in the two crews - Mark Chapman, Jimmy Neesham, Daryl Mitchell and Ben Sears after the Ireland T20I series. Glenn Phillips acquired his lady ODI call-up, Adam Milne got back to the two crews after last having highlighted in the ICC T20 World Cup a year ago. He could be in line to play his first ODI in quite a while; Finn Allen and Ben Sears are likewise an opportunity to make their ODI debuts.

Also Read: Shoriful eager to get his hands on the Dukes ball

Tom Latham will lead the ODI crew in Ireland, with Mitchell Santner assuming control over the reins post that. New Zealand first interpretation of Ireland for three ODIs followed by 3 T20Is in Belfast. They move to Edinburgh for two T20s and an ODI against Scotland before Amsterdam for two T20Is on August 4 and 5. Latham, alongside Henry Nicholls, Matt Henry, Will Young and Jacob Duffy, will fly home post the finish of the ODI series in Ireland.

The 30-year-old all-rounder, Rippon, moved to New Zealand from South Africa in 2013. Having addressed Netherlands on 31 events, he was likewise important for the ODI crew that took on New Zealand before in the year. "ICC qualification rules permit players to address an Affiliate or Associate country while as yet staying accessible for a Full Member country," an official statement from NZC expressed. "Nonetheless, whenever they have been recorded in a worldwide match group sheet for a Full Member country they can't get back to play for the Affiliate or Associate for a long time."

Blade is as of now with the Test group in England and has been held as the T20I attendant. He was first chosen to confront the Netherlands in March in an oddball T20I in Napier, however the game was in the long run deserted because of weather conditions concerns.

"It's, first and foremost's, truly invigorating to set out on voyages through these creating cricket countries," selector Gavin Larsen said. "With all the more full part countries playing them both home and away we're perceiving the amount they're improving and we realize they'll fancy their possibilities in their own circumstances.

"Falling off the rear of the England Test series and in another bustling year, these visits were continuously going to be a valuable chance to additional test our profundity in white-ball cricket. With a T20 World Cup in Australia not far off and an ODI World Cup in India one year from now - this is an extraordinary opportunity to offer players further chances on the global stage.

"Michael Rippon completely merits his determination after predictable exhibitions locally for some seasons now. His left-arm wrist turn is a mark of contrast and he likewise offers some punch down the request with the bat. We have a lot of twist choices in the crews and I'm certain the two Michaels (Rippon and Bracewell) will savor the opportunity to hobnob with Mitch and Ish and learn off their experience.

"Dane's procured his chance off the rear of areas of strength for him so that the Central Stags and it's extraordinary could see his new hit up to the Test crew in England," he added.

Kane Williamson, Trent Boult, Tim Southee and Devon Conway have been refreshed post their Test responsibilities in England. They are normal, be that as it may, to get back to the crease for the white-ball visit to West Indies in August. Normal lead trainer Gary Stead will likewise have some time off for the Ireland series, giving over control to bowling trainer Shane Jurgensen, with batting mentor Luke Ronchi and Luke Wright for help. "Jurgensen and Ronchi will leave for home post Ireland, with Stead returning as lead trainer to be joined by Graeme Aldridge (bowling), Dean Brownlie (batting) and Wright (fourth mentor) for the Scotland, Netherlands and West Indies series," a delivery expressed.