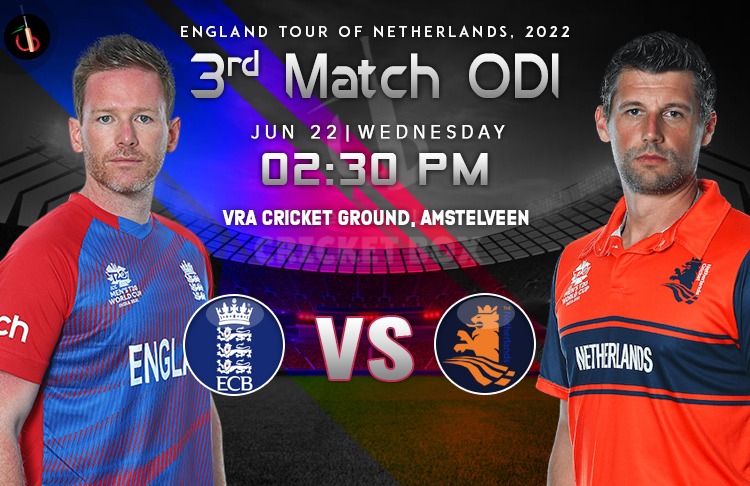 The third and last round of the ODI series between the Netherlands and England will be played on Wednesday, June 22. The VRA Cricket Ground in Amstelveen will have this challenge.

Britain brushed away the Netherlands in the initial round of the series. The Netherlands couldn't quickly return in the subsequent game and experienced the misfortune to hand the English side the series in the second game itself.

Dutch captain Scott Edwards won the throw and picked to bat first. The game was diminished to 41 overs for every side and the Netherlands could figure out how to score 235 toward the finish of their innings. The English bowlers bowled quite well and gotten seven wickets.

Britain openers Jason Roy and Philip Salt moved forward and contributed intensely and their organization established the groundwork for them to pursue down the aggregate. The guests lost four wickets however got across the line in 37th over to take an unassailable lead in the series.

The Netherlands have neglected to act before their home group as they have proactively lost the series and will play for pride in the last round of the series. The English side, in the mean time, will hope to whitewash the series by ending up as the winner in the third ODI on Wednesday.

The pitch at the VRA Cricket Ground is great for batting. The hitters appreciate playing on this surface as the ball comes pleasantly onto the bat. The bowlers should be focused with their lines and lengths while bowling on this surface to hold the run-stream under tight restraints.

Clear skies will welcome the two sides on Wednesday. Temperatures in Amstelveen on Friday are supposed to run somewhere in the range of 12 and 23 degrees Celsius.